Renee turned on her facetime. “I can’t find him.”

“Can’t find who?” her friend Jill said, walking over to the camera and facing Renne. She was standing in her kitchen. Behind her, a small pair of metal arms attached to the wall added spices into a pot of soup on the stove.

“Oh.” Jill said, confused. “Well, did you check on findchild?” Renee nodded. Findchild was a cell phone application created by local parents. They had installed cameras in the neighborhood streets that used facial recognition in real time to locate children. All you had to do was upload your child’s photo into the app. Renee had tried it but nothing was coming up. Perhaps it was because she didn’t have any recent photos of her son.

“Ok well, can you think of where he would be? Maybe the app doesn’t have cameras where he is.”

“ I mean now that the weather is warm he’s been outside constantly. I have no idea what he’s doing out there. Yesterday he went on a ‘run.’ I mean he just got up and ran outside on the streets for 30 minutes. The police stopped him and asked if he was in danger. But he just laughed at them and waved them off! I just cannot wait until he’s on snapchat and instagram and I can learn more about what he’s up to all the time. I’m so sick of being so in the dark.”

“Why do you need him back in the house this afternoon anyway? Doesn’t he usually just come back for dinner?” Jill asked.

“It’s August 20th. The Academy is broadcasting the annual induction and I need Chace to watch it! We’ve always been good about following the rules and limiting Chace’s TV time but I think he needs to see this on TV. I want to remind him what he’ll be going through next year.”

Just as Renee finished her sentence, she heard her son barge into the house. His hair was unkempt and his t-shirt was stretching to fit over his growing muscles. He was holding several leaves in his hands.

“Hi Mom,” he breathed. Renee signaled goodbye to Jill and shut off the facetime. Chace was taken aback by her attentiveness to him.

“What are you holding?”

Well, we were learning about leaves in school and I really want to look at the veins on the -” Renee cut him off. “That’s great Chace, but we have more important things to do today. You may or not know but the Academy is holding its induction ceremony today and I want you to watch it, because it will be you next year!” Chace rolled his eyes but Renee didn’t notice, she was too busy unlocking the TV room to turn on the broadcast. He followed her into the room and reluctantly sat down. The news flared up onto the screen.

“Today was the new member induction into The Academy, the United States Government’s mandatory two year computer technology academy. ” A number of 18 year old students were were shown seated in an auditorium. 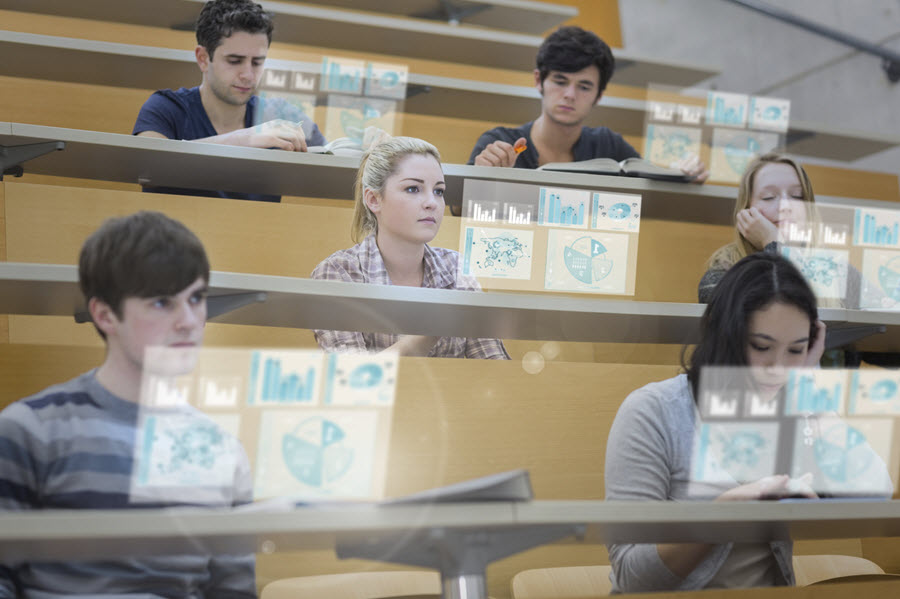 “The Academy ensures a heightened computer experience for all American Adults. In the first year of schooling, students will learn fundamental computer and smartphone skills and cyber defense techniques. In the second year, they will enter a vocational training sector. They can choose to learn technological skills required for their desired workforce. Upon graduation, they’ll receive their technology license and finally be allowed to purchase their first cell phone.” Images of rows of young adults sitting at desks staring into computer screens flashed across the TV. Chace cringed at how uniform and robotic the students looked. He would have tried to turn the TV off but he didn’t know how. He looked over to his mom, who was beaming at the TV.

“I’m so excited Chace, you’ll finally be able to use technology and snapchat me!” Chace barely understood what snapchat meant. Like every other child in America, he wasn’t allowed access to technology besides restricted television at his parent’s discretion.

“ Mom, what would happen if someone didn’t want to go to The Academy?”

“Didn’t want to go? She laughed, shocked. “ Why would anyone not want to get their technology license?”

“Well,” Chace stammered, “I like being outside, and I love all the memories I’ve made with my friends. After school we talk about the books we read, and they’re actually really interesting. And I heard that there’s not much time to exercise during the two years at The Academy.”

“Enough Chace, you’re being ridiculous. Are you forgetting why the Academy is in place?”

She explained it anyway. “ In case you are forgetting, The Academy is in place to keep you safe. You’re going to learn how to survive in technology. And you can’t do that without this training.” She didn’t need to explain more, but she kept going. Chase stood up and started to back out of the room, listening to reiterate the recycled justification for the Academy that she was fed when she attended 30 years ago.

“In response to the 2020 worldwide terrorist data breach, the government deemed it too unsafe for children to access any and all technology. They instituted the Academy to protect US citizens and teach everyone cyber self defense. Do you understand, Chace? If you want to live in this world, you’re going to have to learn. How are you going to order food, let alone program the kitchen to cook it, if you don’t know how to use technology? How are you going to meet people when you move out of this neighborhood? The Academy teaches you life skills. You’re going to learn how to use technology and you’re going to learn how to use it safely.”

Chace couldn’t bear to hear anymore about the Academy. He burst out the house and walked over to his friend Anna’s house. He went in her backyard because he knew she would be in outside. Everyone his age enjoyed being outside.

He sat down and thread his fingers through the damp grass. As he observed the veins in the grass and felt each individual strand brush up against his fingers he wondered if he would ever feel something so real ever again. He couldn’t get the images of the Academy students out of his mind. Their empty smiles and robot like- fingers. He saw no art in creating computer programs. In his 17 years of life, all he observed about technology was how disconnected it made his parents from him. They had virtually no similar interests.

Anna walked out of her house into her backyard.

He looked up at Anna and she gave him a confused look. He knew what she was going to say. You have to go. There’s no option.

“Chace, you need your technology license to get a job in this world. Plus, how would you order and cook your food without technology when you’re living on your own?” Chace thought about how his mother was constantly working to program the kitchen to cook new recipes. Anna was right, there was really no way to survive without a technology license.

“I saw the faces of those people at the induction. They looked lifeless. Who knows what they do to you in there?”

“They teach you how to use technology. It really doesn’t seem that bad, we’ll still get to go outside but we won’t want to, I heard they have virtual reality labs that can transport you to anywhere in the world you want.”

Chace couldn’t imagine any virtual reality that would be better than the real outdoors. In past 17 years of his life, he’d enjoyed exploring the outdoors and meeting friends. He bonded with his friends through exercise, and he felt a deep connection to people like Anna, whom he could rely on. He felt like he could talk to her all the time, all he had to do was walk over to her home. How would he be able to see any of his friends if they were all glued to their screens? He didn’t care that technology was going to enhance his life. He knew there had to be another way.

“Well, I’m not going to the Academy next year.” Chace proclaimed.

“It’s a mandatory government program, Chace. How are you going to get out of it?”

“ I don’t know Anna, but I’ll find a way.” His voice trembled slightly as he said that but he was confident. “And you should come with me.”

Anna thought about the prospect of resisting a program that had been so successful for so many years. She had never heard of someone not going to the Academy. But Chace had a point, and she too loved the outdoorsy active childhood she had experienced. Before she could say anything else, Chace stood up and tied his shoelaces.

“I’m going on a run to brainstorm how I’m getting out of this. When you’ve decided if you want to join me, let me know. Otherwise, we’re going to give you the best last year of freedom anyone has seen.”

Thank you for reading my spectulative fiction story! I hope you enjoyed! To see my homepage, check out this!